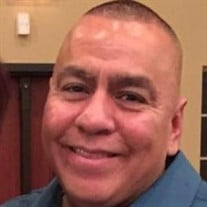 William J. Velasquez William was born in Blue Island, Illinois to Joe A. Velasquez and Sara Contreras on September 2, 1963. His siblings include: Cynthia Castillo (Sylvano), Gilbert Velasquez (Carmen), Virginia Castro, as well as his late siblings: Pepe (Ofelia), Michael, and Irene. He was known by many names such as Billy, Dobee, and Big Papi. He grew up in Blue Island and graduated from Dwight D. Eisenhower High School. He was a longtime employee for Southwest Airlines. He dedicated 38 years of his life to his job. He was known for his hard work ethic, and always went above and beyond at his job. Throughout his life Billy developed many relationships with his co workers that turned into life long friendships. Over the years he had 7 children: Ricky, Justin, Jackie, Anthony, Alex, Courtney and Christopher. William married Gloria on December 29th 2002. They lived in Alsip for a short amount of time and then later relocated to Romeoville, Illinois. When he built his house, he always desired that it be filled with family and friends. He emphasized the unity of his children, and preached that charity starts at home. He found the upmost joy in having all of his children together. His faith in Jesus Christ was the center of his life. This was instilled in him early on by his late Father Joe Velasquez and Mother Sarah Contreras. He was truly a man after God’s own heart. Devotion was extremely important to him and he yearned to understand the depths of scripture. His honor for God was evident throughout his journey. As many may know William was a lifelong Chicago Cubs fan and sports fanatic. He was blessed to see the Chicago Cubs win the World Series in 2016 for him and his late father. He often times envisioned himself performing better than those playing on the field. Along with his love for sports, he had great passion for food. Some of his favorites included Beggars pizza, Maxwell Street, and Zacatacos. He frequently indulged in sweets, such as Boston creme donuts, ice cream, 50/50 soda, and Fannie May turtles. To offset his love for food, Billy devoted himself to working out and has passed this on to his children. Billy also had a love for music which consisted of a wide variety, including one of his favorite artists, Prince. He will be remembered as a loving husband, father, brother, and friend. He has left an everlasting impact on everyone he has encountered. The fictional character Rocky Balboa and Billy shared many similar ideologies. Billy had one thing he would want you to remember.... “It’s not about how hard you hit, it’s about hard you can get hit and keep moving forward. How much you can take and keep moving forward... That’s how winning is done.” -Rocky Balboa

The family of Mr. William J "Billy" Velasquez created this Life Tributes page to make it easy to share your memories.

Send flowers to the Velasquez family.