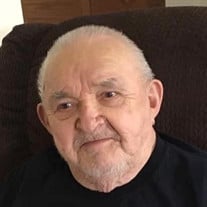 Wayne Jacob “Jake” DePorto, age 91, of Frankfort passed away on Monday, October 26, 2020, at Silver Cross Hospital in New Lenox, Illinois. Wayne was born January 14, 1929, in Joliet, Illinois. As a young man, Wayne worked with area farmers. He graduated from Joliet Township High School in 1946 and went on to Joliet Junior College, learning Print Shop Skills. He then began working for Gold Star Buses where he met Henrietta Greenway and, on October 14, 1950, they were married at St. John’s Evangelical & Reformed Church in Mokena, Illinois. He opened Wayne’s Print Shop in Frankfort and published “The Frankfort Times.” He and Henrietta were owners of A&Ws in New Lenox, Lockport, Frankfort, and New Lenox again from the late ‘50s until the mid ‘70s. Wayne served on the Frankfort Village Board and was a volunteer member of the Frankfort Fire Department in the ‘50s-‘60s, and he was on the Planning & Zoning Committee in the ‘70s-‘80s. Wayne worked for the US Postal Service in Frankfort as a Rural Carrier for over 38 years. After retiring in 1989, he started driving buses for Peotone and Lincoln-Way School Districts for athletics, and nothing thrilled him more than driving the state champion Lincoln-Way softball team. Wayne and Henrietta enjoyed spending time fishing in Minnesota with family and friends, staying at their trailer “Woodtick Haven.” Wayne is survived by his loving family, daughters Karen DePorto of New Lenox, IL, and Carol (John) Johnson of Homer Glen, IL, and grandchildren Alyson, Margaret, and Eric. He is also survived by sisters-in-law Lois DePorto and Ellen Gebauer, numerous nieces and nephews, cousins and many friends. Wayne was preceded in death by his wife Henrietta, his parents Jacob and Ella (Warning) DePorto, and brother Wesley DePorto. Wayne was a member of St. Peter’s United Church of Christ, the National & Illinois Rural Letter Carrier’s Association since 1952, the Matteson Lodge #175 A.F. & A.M. since 1981, the Medina Shriners, and Nova Star Chapter #187 Order of the Eastern Star of Illinois. Visitation, Friday November 6, 2020, 10:00 AM until time of Masonic Service at 11:30 am, followed by a Chapel Service at Vandenberg Funeral Home, 19604 Wolf Road, Mokena, IL. 60448. Interment to follow in Pleasant Hill Cemetery, Frankfort, IL. In lieu of flowers, memorials may be made to Shriners Hospital for Children. * Due to the global health pandemic (COVID-19) and in accordance with public health mandates; Face coverings are mandatory for entry into the Funeral Home. Gathering size will be limited to less than twenty-five (25) attendees in the funeral facilities at any given time. For information 708-479-1210 or www.vandenbergfuneralhome.com

The family of Mr. Wayne Jacob “Jake” DePorto created this Life Tributes page to make it easy to share your memories.

Send flowers to the DePorto family.