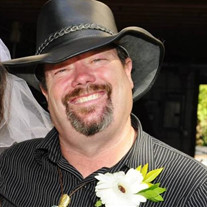 Timothy John Austin born January 26, 1963 in Evergreen Park Illinois passed away on December 5, 2019 in Chicago, Illinois. Tim lived in Oak Forest/Peotone, Illinois at the time of his death. Timothy or “Timmy” (aka. Larry the Liar,) was an awesome carpet installer. Timmy was creative and designed many one of a kind carpets for customers. Timmy was kind, caring, doted on his children and had one of the biggest hearts you could find. He put everyone’s needs before his own. He was, however, on what was commonly called “Timmy Time,” when he got to it, he got to it. But he always got the job done. Timmy had more friends than one could imagine and was always present when someone needed him. Timmy was a die-hard Chicago Blackhawks fan, and could never be disturbed when they were playing. He was also a huge Chicago Bears Fan and love his Chicago White Sox. Timmy spent most of his life as a prankster, keeping everyone laughing with his quick wit and deep belly laughs courtesy of his father, Willy and mother Dorothy. Timmy is survived by his significant other Laurie Grant, daughter Laura Hatch (Chris,) daughter Paige Town (Andrew,) son Michael Vanderjack (Megan,) daughter Lacey and son Shane. He is also survived by his mother Dorothy Austin (nee Tague,) preceded in death by his father (Wilmer Austin.) He is also survived by older sister Kathy Zebrauskas (Daniel,) older brother Michael, older sister Colleen and younger sister Megan Austin-Zatlokowicz (Chris.) Timmy was preceded in death by his maternal grandparents Dorothy Porter (Donald), William Tague and paternal grandparents, George Austin and Gladys Austin Buchalo and Joseph Buchalo. Timmy is survived by 12 nieces and nephews and six grandchildren, many cousins and many friends. Visitation will be held at Vandenberg Funeral Home 17248 Harlem Avenue, Tinley Park Illinois 60453. Services will be held from 5:00 – 9:00 p.m. with a prayer service at 8:30 p.m. Everyone will be invited to Bailey’s Bar and Grill, 15548 Cicero Avenue Oak Forest Illinois 60452. In lieu of flowers donations for the family would be appreciated.

Timothy John Austin born January 26, 1963 in Evergreen Park Illinois passed away on December 5, 2019 in Chicago, Illinois. Tim lived in Oak Forest/Peotone, Illinois at the time of his death. Timothy or &#8220;Timmy&#8221; (aka. Larry the Liar,)... View Obituary & Service Information

The family of Mr. Timothy J. Austin created this Life Tributes page to make it easy to share your memories.

Send flowers to the Austin family.