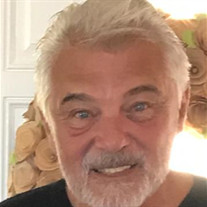 Thomas J. Manzella, Sr. (August 19, 1946-November 19, 2018) Thomas John Manzella, Sr., passed away peacefully at home on November 19, 2018 after a short, hard battle with pancreatic and liver cancer. Born on August 19, 1946 at Mother Cabrini Hospital in Chicago to Pearl (nee Holt) and the late Louis D. Manzella. He is survived by his “Lindblom High School Sweetheart”, Helen M. Klos, to whom he was united in marriage on April 23, 1966 in Chicago. Tom passed away just days after the 56th anniversary of their first date on November 16, 1962. He is the loving father of the late Maria Pearl Manzella. Besides his wife, Tom is also survived by his son, Thomas John Jr. (Rebecca) and is the proud Papa to the three lights of his life, Tommy III, Maria and Jack Manzella. He is also dearest brother to Louis (Deb) Manzella, Linda (Bob) Portman, John (Grace) Manzella and Mary Lou Naugle, and special close cousin to Joanne Kucinski. He is uncle, great-uncle, cousin and Godfather to many; and best friend to the Hon. Richard Hofeld and Larry Maderak. Retired from the Archdiocese of Chicago, after overseeing the renovation of St. Alphonse Church in Lemont, Tom continued to find satisfaction and pleasure by assisting as a Project Manager to “Habitat for Humanities” in Illinois, Kentucky and Florida communities for over 12 years. Tom and his family have been long-time residents of Tinley Park (circa 1973) having resided in the same “house on the corner” and most recently spent winters at Emerald Lakes, located in Clermont, Florida. Pursuant to his wishes, cremation rights have been observed. Visitation will take place at Vandenberg Funeral Home (17248 S. Harlem Avenue, Tinley Park) on November 28, 2018 from 4pm to 8pm. Private family interment will take place on November 29, 2018 at Mt. Carmel Cemetery in Hillside. In lieu of flowers, donations can be made to St. Jude Children Children’s Research Hospital, where Tom and Helen have been long-time donors.

The family of Mr. Thomas J. Manzella Sr. created this Life Tributes page to make it easy to share your memories.

Send flowers to the Manzella family.