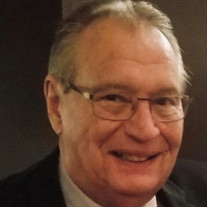 Former Mokena Mayor, Ronald J. Grotovsky, (age 77) passed away on August 5, 2021 at his home in Florida. He came into this world with a big bang, being born in the backseat of a car in Chicago on November 3, 1943, to James Grotovsky and Anna Chisek Grotovsky. He married Cheryl M. Johnson, his one true love and soul mate on July 17, 1965. Ron had an entrepreneurial spirit and was always interested in jumping off the deep end into new business ventures. He was a co-owner of Associated Attractions, a Chicago based parade float company (for reference, Ferris Bueller's float), co-owner of GB Feld, a pennant string company, and co-owner of MBLO Funding, a mortgage company. His passion for public service brought him to the Office of The Secretary of State of Illinois and he ultimately became the Land Use Director of Will County. Ron is survived by his wife of 56 years, Cheryl, and daughters Vicky (Ron Wesolowski) of Mokena and Sherri (Doug Aikin) of Colorado. Family was everything to him and he was happiest spending time with his five grandchildren, Tori, Zachary, Sunny, Max and Sydney. He loved to golf with the kids, and was teaching them the art of betting on the game. Ron has four siblings, the late Rev. Edward (late Mary Ann), Theresa (late John Hutfles), Jim (late Virginia) and Bernadette (Peter Winiarski). Ron is also survived by sister-in-law Phyllis (Bill Cambell) and brother-in-law Steve (Shelia) Johnson of Michigan and so many nieces and nephews. His public service to the Mokena community began when he served 6 years as Trustee followed by two terms as Mayor. He was instrumental in many efforts for the town and one particularly close to his heart, the Mokena Mayor's Golf Outing, has raised hundreds of thousands of dollars serving local charities over the past 30 years. He affectionately became known as the "Stop Sign King," and earned a street named after him. After decades in Mokena, Ron and Cheryl's love for Bair Lake in Michigan brought them to “pack it up” and head to the lake. He very much loved the lake life, met many lifelong friends, was involved in a golf league, and even jumped into a bit of local land use planning. They were fortunate to spend the summers on the lake and travel in the winters with their many friends from both Michigan and Illinois. In perfect "Ron spontaneous style," he suggested moving to Florida during a world-wide pandemic to spend their golden years. They found a beautiful spot in The Villages, where he could cultivate his love/hate relationship with a golf club. "Big Ron" was devoted to Chicago sports, in particular the White Sox and Bears, he enjoyed an occasional scotch and water, was a pizza aficionado and lover of a good burnt steak. Should you have run into him, you could guarantee a stogie in his mouth, a spot on his shirt and a smile on his face. Ron had a very deep faith in the Lord, praying the rosary daily and always instilling that faith in his family. He firmly believed that we are put on this earth with a purpose, and it is without a doubt that he fulfilled his. It is a blessing to know that he, in his brother's company, can rest easy in the arms of Jesus and his legacy will live on in those still with us today. Despite our heartbreak, let this not serve as a goodbye, but as a reminder of a life well lived and a celebration of a man well loved. Visitation will be held Thursday, August 12, 2021 4:00-9:00 PM at Vandenberg Funeral Home, 19604 Wolf Road, Mokena. Funeral Friday, August 13, 2021, 9:00 AM at the Vandenberg Funeral Home, followed immediately by the procession to St. Mary Church, Mass is at 10:00 AM. For information on services, 708-479-1210 or Vandenbergfuneralhome.com

Former Mokena Mayor, Ronald J. Grotovsky, (age 77) passed away on August 5, 2021 at his home in Florida. He came into this world with a big bang, being born in the backseat of a car in Chicago on November 3, 1943, to James Grotovsky and Anna... View Obituary & Service Information

The family of Mayor Ronald J. Grotovsky created this Life Tributes page to make it easy to share your memories.

Send flowers to the Grotovsky family.