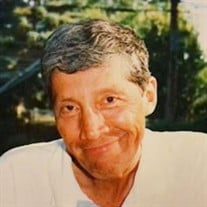 Robert “Bob” Gutierrez, age 91, passed away peacefully at his Orland Park home on Friday, January 7, 2022. Survived by his loving wife of 53 years, Barbara Jean Rauworth Gutierrez; siblings Carmela Camarena, Jesse (Donna) Gutierrez, Rachel Prado, and Dr. Daniel (Barbara) Gutierrez; sisters-in-law Carmen Gutierrez, Pat Vitté and Terri Rauworth; children Elena (Michael) Byrne and David (Nicole) Gutierrez; grandchildren Quinn, Seamus, Sophie and Eli Byrne, and Nadia and Mila Gutierrez; numerous nieces and nephews. Preceded in death by parents: Natividad and Felipa Gutierrez; siblings: Joseph (Genevieve) Gutierrez, Hope Angeles, David Gutierrez, and Anthony “Tony” (Dorathy) Gutierrez. Born June 7, 1930 in Joliet, IL, Bob lived with his family in Shorewood, IL for 45 years in a home he helped build, alongside his brother Tony and cousins. In his youth he played basketball and baseball, graduating from Joliet Township High School (JTHS) in 1949. He earned his bachelor’s degree from Illinois State University) and his master’s degree from Northern Illinois University. He served in the army in Alaska during the Korean War. He enjoyed listening to music, especially Mahler, and sang in school and church choirs, as well as the JTHS Alumni Choir. Most of his life, Bob taught in the business department at JTHS, first at Joliet East, and later at Joliet West. He also coached boys’ and girls’ tennis teams at both schools. In the summers he worked in the Tony Gutierrez Construction Company. He also served on the Shorewood Parks & Recreation Committee and the board of the Learning & Skills Center, as well as delivering Meals on Wheels. He was a member of the Stone City Post of VFW. A strong Christian all his life, Bob was a longtime member of 1st Baptist Church of Joliet. He later enjoyed being a member of Westminster Presbyterian Church in Joliet, and St. John’s United Church of Christ in Mokena for the last five years. Bob treasured being together with family for gatherings large and small, as well as hunting or fishing trips with brothers. Being with him always felt like a party, because there was always plenty of good food and laughter (and yes, plenty of dad jokes). The family hopes to hold a memorial service in June near the time of his birthday, with a celebration of life party to follow.

The family of Mr. Robert Gutierrez created this Life Tributes page to make it easy to share your memories.

Robert “Bob” Gutierrez, age 91, passed away peacefully at his...

Send flowers to the Gutierrez family.