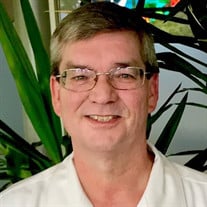 Richard F. Yorke, 61, a resident of Mokena, formerly of Naperville, IL, died Thursday, May 16, 2019 in New Lennox. Rick was born in Aurora Illinois on March 5, 1958 to Tom and Delores Yorke, attended St. Raphael elementary school, Benet Academy, and received his bachelor’s degree in Accounting from the University of Illinois. He married Mary Kay Lorch, his high school sweetheart, on July 26, 1980 and together they had four wonderful children and seven grandchildren. Rick is survived by his daughters: Lindsay (Joe) Gallagher, Christina (Paul) Aleck, Jessica (Eric) Bernacki, and son Richard (fiancé Hillary). Surviving also are his siblings: Doug (Mary), Chris (Flo) Andler-Kordas, Chery (Mel) Fein – all of Naperville, along with grandchildren Tommy, Ben, Mia, Emma, Dawson, Lukasz, and Brett. Rick’s pal, “Dexter” the Golden Retriever could usually be found wherever Rick was. Rick was a favorite of his numerous nieces and nephews and their families, all of whom will miss him dearly. In addition to his loving parents, Rick was preceded in death by his grandparents, William & Annie Tehan Yorke and Morrell & Rose Sincerney Pratt, and his brothers Thomas and Randall (Jeanne) Yorke. Visitation will be from 3pm to 8pm on Thursday, May 23rd at Vandenberg Funeral Home, 19604 Wolf Road, Mokena, IL 60448. There will be a short service at the funeral home on Friday, May 24th at 9:30am, followed by a short procession to St. Mary’s Church, 19515 115th Avenue in Mokena, for a mass beginning at 10:00AM. Inurnment will be private

The family of Mr. Richard F. Yorke created this Life Tributes page to make it easy to share your memories.

Richard F. Yorke, 61, a resident of Mokena, formerly of Naperville,...

Send flowers to the Yorke family.