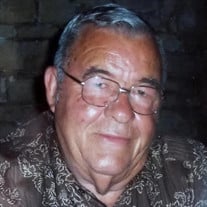 Richard (Dick) Dale Bishop "82" formerly of Braidwood passed away unexpectedly Saturday, May 16, 2020 in Berrien Springs, MI where he lived the past several years. Born August 20, 1937 in Mason, IL, Richard was the son of Donald and Bessie Bishop. He was raised and educated in Mason and Effingham High School. Richard was a loving husband to Hazel (nee Clark) she preceded in 2007. After retirement they enjoyed traveling the United States in their travel trailer for quite a few years before settling down in Shamrock Park in Berrien Springs, MI where they had the perfect spot right next to the St. Joseph River! He loved it there and loved fishing and feeding his wild yet pet ducks which is where he continued to live all these years. He also had a gift of gab, never met a stranger. Over the years he made several life long friends in Shamrock Park. He enjoyed having a beer at the American Legion and their Friday night fish frys. Richard was a gifted craftsman and remodeled homes until recent years. He was a cement finisher and helped build the Chicago Skyway in his younger years. He worked for Hall Plumbing & Heating for several years then went to be the Maintenance Supervisor for the Reed Custer School District until he retired in 1996. Richard was also the former owner of Bishop's Family Greenhouse & Florist where he had a passion for growing plants and helping so many people in town. Throughout the years, anywhere he was invited he would always show up with lots of cheese and crackers for his dish to pass. Survivors include his daughter Jo Ann (Dennis) Maloney of Tinley Park, son Dale Bishop (Mary) of Oak Forest; cherished Grandfather of Sarah Veale of Gallatin, TN, Craig (Carla) Muzzarelli of South Wilmington, Nicole (Adam) Szaler of Plainfield; He loved all his great grandchildren, Dustyn, Hannah, Dylan, Scarlett, Daxton and Beckett. He was looking forward to meeting his new great great grandson this summer. Richard was preceded in death by his parents, Donald and Bessie Bishop. He was the oldest brother to Evelyn, William (Viet Nam) and Linda. Surviving siblings are Patricia, Judy, Peggy, Tom, Chuck and Betty Lou. He will be missed by many, including life long friends since high school, Adeline and Neil Hall and their children. He will also be missed by Connie Kiger Beebe, her children & grandchildren. A family that always looked in on him & made nice memories with. Because of his love for flowers and vegetables, he would have loved for anyone to go plant one of his favorite flowers and plant it in your yard called a Hibiscus (perennial) in his memory. Due to the COVID-19 funeral services are being held privately for family at a later date with a graveside service.

Richard (Dick) Dale Bishop "82" formerly of Braidwood passed away unexpectedly Saturday, May 16, 2020 in Berrien Springs, MI where he lived the past several years. Born August 20, 1937 in Mason, IL, Richard was the son of Donald and Bessie Bishop.... View Obituary & Service Information

The family of Mr. Richard "Dick" Dale Bishop created this Life Tributes page to make it easy to share your memories.

Send flowers to the Bishop family.