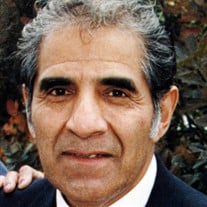 Phillip Ruiz Velasquez was born May 29, 1930 in Chicago, Ill., to Angel Velasquez and his wife Maria de la Luz “Lois” Almaguer. Nicknamed “File” (pronounced Fee-lee) by his large and loving family, he enjoyed and participated many sports, was a huge fan of Western cinema and loved Big Band music. Growing up in the 1930s and 1940s in the then-thriving South Chicago neighborhood, he had a large group of friends of all ethnicities, playing baseball in streets and alleys. The oldest of six children, Velasquez dropped out of Bowen High School during his senior year to help support his family, which included three younger brothers and two sisters. He began work at Carnegie Steel Mill. Active in ROTC during high school, he enlisted in the U.S. Army in 1951, during the Korean conflict. After basic training at Ft. Leonard Wood, Missouri, he was stationed in Germany, where he was introduced to his future wife, Aloysia “Kate” Michel, by her brother Siegfried. Kate was a wonderful and charismatic woman who brought stability and joy to his life. Phil and Kate’s first child, Philip Jr., was born in Frankfurt, Germany, in December 1952. When his European tour of duty was over, Velasquez moved his family back home to his South Chicago neighborhood. Several generations of the Velasquez family lived in a 3-flat building in 3000 block of E. 93rd St.; Angel and Lois lived on the top floor, always keeping a steady supply of beans and tortillas on hand for their children and grandchildren. Kate and Phillip’s second child, Gloria Louise, was born in May 1955. Three years later, in 1958, third child Richard Edward was born. The Velasquez family was raised in the South Chicago neighborhood, where the U.S. Steel South Works plant provided the livelihood for many of its residents. Velasquez worked in the mills for 20 years. He was very active in the Local 65 Steel Workers Union, supporting the rights of steel workers and laborers. Working in the steel industry was backbreaking work—literally. Velasquez suffered several back injuries and endured surgical procedures that would affect his health for the rest of his life. A non-smoker, Velasquez also suffered from chronic breathing problems, attributed to constant emissions from steel plants. Velasquez was active during the steelworkers’ strike in 1958, seeking better pay and working conditions. Being on strike didn’t deter him from providing a living for his family. He, along with some of his steelworker colleagues, started an interior-decorating business. He hustled painting and decorating jobs throughout the city and suburbs. When the steelworkers’ strike ended, he was torn about going back to the mill, because he had built up a steady clientele in the interior decorating business. He returned to the mill, but took on many side jobs to provide for his family. As the steel industry began its decline, Velasquez realized he had to reinvent himself. He applied for City of Chicago jobs and started taking electronics classes in the evenings. He was soon hired by the city and became a radio repair technician for the Chicago Police Department. During this time, Velasquez moved his family to the Hegewisch neighborhood of Chicago and became active in the 10th Ward Democratic Organization. He was a supporter of Ald. Stanley Zima and, subsequently, Edward Vrdolyak. He was known for “getting out the vote” in the 10th Ward. Velasquez enjoyed his CPD work for 20 years before he reinjured his back, forcing him to take disability. He greatly missed being busy because of his strong work ethic. He and his family moved from Hegewisch to Homewood, Ill., enjoying the proximity of Aurelio’s Pizza and Walt’s Grocery. He and Kate adopted a cat, naming it Sweetness in honor of Walter Payton. When months later the veterinarian told them Sweetness was a female, they kept the name anyway. Phil and Kate jokingly called each other “Punk” when they met in Germany. That practice endured for decades. Occasionally, when out dining, waiters thought their children incredibly rude for calling their elders’ “Punk”. In 2005, the couple and their son Richard moved to Tinley Park, where Velasquez was residing at the time of his death. His wife Kate predeceased him, passing away February 2012. He loved his children and his siblings: son Phil Velasquez Jr. (and wife Robin Daughtridge) of Chicago; daughter Gloria Louise Hall (and husband Stephen) of Honolulu, Hawaii; son Richard Edward Velasquez of Tinley Park; brother Joseph Velasquez (wife Beverly) of Phoenix, Ariz.; brother Raymond Velasquez (wife Dorothy), both deceased; sister Gloria Vargas (husband Eddie, deceased) of St. John, Ind.; sister Mary Lou Ruiz (husband John) of Crete, Ill.; and brother Angelo (wife Chris) Velasquez of Brick, N.J. Velasquez also is survived by a granddaughter, Catherine Leilani Holsapple of Broken Arrow, Okla., and numerous nieces and nephews, all of whom he cherished and adored. Services are Saturday, Nov. 14, 2-4 pm visitation, 4 pm memorial, at Vandenberg Funeral Home, 17248 S. Harlem, Tinley Park, Illinois 60477. Inurnment at a later date at Abraham Lincoln National Cemetery. In lieu of flowers, family requests donations to Vitas hospice at St. James Hospital, Chicago Heights: http://www.vitas.com/il/chicago-hospice/about-us/how-to-donate

The family of Mr. Phillip R. Velasquez created this Life Tributes page to make it easy to share your memories.

Send flowers to the Velasquez family.