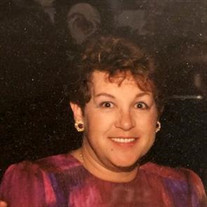 Michele Gilbertson Rak, age 75 of Frankfort, IL, passed away on Friday, March 8, 2019. She was born to the late Vale Gilbertson and Gwenneth Coates Gilbertson in Melbourne, Australia, on February 15, 1944, and moved with them to Chicago in 1946. Michele graduated from Mother McAuley Liberal Arts High School, then studied at the Wesley School of Nursing at Northwestern Memorial Hospital. After two successful years of nursing training, she decided to leave school to begin building her family. In 1966, Michele met Paul Joseph Rak, and they began a 53-year journey together. A year later they married, and in 1968, they welcomed Paul Jr. to the family. Despite the challenges of being a new mother, Michele supported Paul in his successful pursuit of an accounting degree. Three more children followed, with Melanie in 1971, Christian in 1972, and Kevin in 1984. While Michele never wavered in her commitment to her family, she still made time to volunteer in her children’s elementary schools, teach catechism at St. Mary’s Catholic Church in Mokena, and mentor many friends of Bill W. She also built strong relationships with dozens of clients and friends over the course of 20 years of bookkeeping and accounting work in Paul’s firm. Travel was a passion of Michele’s, and she and Paul made multiple visits to Michele’s family in Australia, toured England, and went on culinary adventures in France. Michele was a fierce cook and baker and the creative star of family parties; she inspired her son Kevin to be just as adventurous in the kitchen. She was a voracious reader of a wide range of authors, from Shakespeare to Barack Obama to J. K. Rowling. She also loved cheering on the White Sox and Northwestern with her family. It is sad but fitting that Michele passed on International Women’s Day. She was a strong fighter who successfully beat colon and lung cancer in the 18 months preceding her death. She was an inspiration and role model to her five beloved granddaughters, Tiffany, Gwen, Sydney, Hazel, and Violet. Michele is also survived by her loving husband and four children, her daughters-in-law Marilyn, Barbara, and Erika, her siblings Lyn, Michael, and Paula, and countless nieces and nephews. Memorial services for Michele will be held on Tuesday, April 16 from 1:00 PM to 6:00 PM at the Vandenberg Funeral Home at 17248 S. Harlem Ave. in Tinley Park. The eulogy and remembrances will begin at 1:30 PM. In lieu of flowers, please consider a donation to the General Fund of Together We Cope, which assists the elderly, people with disabilities, unemployed and underemployed single parents, and many others in need. Go to togetherwecope.org for more information.

Michele Gilbertson Rak, age 75 of Frankfort, IL, passed away on Friday, March 8, 2019. She was born to the late Vale Gilbertson and Gwenneth Coates Gilbertson in Melbourne, Australia, on February 15, 1944, and moved with them to Chicago in... View Obituary & Service Information

The family of Mrs. Michele Rak created this Life Tributes page to make it easy to share your memories.

Send flowers to the Rak family.