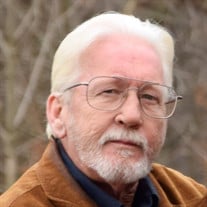 Michael Levi Fox, 63, of Mokena, passed away on September 14, 2020 in Mokena, IL peacefully at home with his wife Linda at his side after a courageous battle with cancer. Visitation will be 12:00pm - 3:00pm on Saturday, October 10, 2020 at Mokena United Methodist Church. A private memorial service will follow. Mike’s wish was to be cremated and interred at Abraham Lincoln Cemetery at a later date. Mike was born in Indianapolis, IN to Dillard R. Fox and Mildred Fox Abbott (nee Teague) on July 4, 1957. He married his wife Linda on July 16, 1994 in Lawrence, IN. He worked as a Maintenance Technician for Washington Twp. School District in Indianapolis, IN before relocating to IL. For many years Mike worked as a Mechanic for Dave’s Auto Sales & Service. Recently he was employed by the Mokena Park District as the Facility Maintenance Manager for the Oaks Recreation Center. He was a veteran during the Vietnam War serving in the Army as a Tanker Crew member. He and his wife Linda were the founders of Heartland Service Dogs in Mokena, IL, a non-profit providing specially trained dogs for people with disabilities. He was an avid NASCAR fan following #48 Jimmie Johnson. He also loved football and rooted for his hometown Indianapolis Colts. Mike enjoyed traveling with his wife especially to many of the National Parks in the US. Michael is preceded in death by his mother Mildred Abbott, an older brother, David R. Fox and a nephew at birth. Michael is survived by his wife Linda Fox (nee Bergman), his children from a prior marriage - Misty K Fox, Michelle L Furgason (Chad) and Michael R Fox. He is also survived by sisters Marion Pritchett (Tom), Gwen Pryor (Gary), Linda Ross (Rodney), two brothers Ronald (Naomi), Mark, his father Dillard R. Fox, 10 grandchildren, one great grandchild and numerous nieces and nephews. In lieu of flowers, donations can be made to Heartland Service Dogs Inc., Mokena, IL

Michael Levi Fox, 63, of Mokena, passed away on September 14, 2020 in Mokena, IL peacefully at home with his wife Linda at his side after a courageous battle with cancer. Visitation will be 12:00pm - 3:00pm on Saturday, October 10, 2020 at... View Obituary & Service Information

The family of Mr. Michael Levi Fox created this Life Tributes page to make it easy to share your memories.

Send flowers to the Fox family.