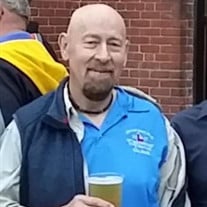 Mark W. Muehler from Mokena , who grew up in this community, currently residing in Homer Glen passed away on July 21st at Advocate Christ Medical Center in Oak Lawn from complications of a Heart Attack He was the first baby born in Joliet at Silver Cross Hospital on January 1st for which he received a special certificate. Mark graduated from Lincoln Way High School and went on to attend the University of Denver and Southern Illinois University from which he graduated and met his soon to be life partner Patricia (PAT) Sokolowski who resided in Chicago. Deciding to pursue a career in law he attended Valparaiso University in Valparaiso Indiana. His father passed away shortly after graduating from college, leaving 2 businesses he and his wife had started in Mokena- The W.A.Muehler Real Estate and Insurance Agency .His Dad Willy A. Muehler ( Bill) and his mother Gertrude I. Muehler, (Toot) Running both companies became difficult for Marks mother so she asked for Marks help . He left law school to help run the family business and to marry his college sweetheart Pat. They had no children. They lived in Mokena and Pat became part of this Real Estate firm. Upon his Mothers death , He and his sister Diane Weber sold the Insurance agency to someone who would continue to operate it from the same location in Mokena. Marks Mother and Father designed and built a Laundromat building with offices for their businesses located on Front Street in downtown Mokena . After Mark took over the Real Estate co it soon became known as Century 21 Muehler Real Estate ,which he then sold His love of building and restoring houses led him to start a new chapter in his life by forming a construction company, Country Manor Builders. Building Custom Homes in the SW & Western suburbs of Chicago for which he received numerous building awards. His Love of History , which was his major in College, led him to purchase and restore a Historic circa 1860’s Farm House called “The Stone Manor.” He created offices for his construction company in part of the house that formerly housed the farm hands who worked this 1,000 acre farm, He continued to operate from these offices until his unexpected death. One of Mark’s passions in life was sailing, most often with 2 friends Mike Steck from Naperville and Trey Ritter from Waukegan. Trey wrote a tribute piece for Marks sailing friends. “ 8 BELLS FOR YOU MARK” He recalled their sailing adventures on a boat Mike owned called Caliente. Mark was a veteran sailor with 23 Chicago to Mackinac races, all on the Caliente with Mike and me. We won the 2016 race and Mark made a fun video about it. YouTube.com-Caliente 1996 Mac We had quite the adventure in 2002,flipping the new Trimaran. This was memorialized in a Weather Channel Storm Stories episode in which Mark saved a crew mates life! You tube.com-2002 Hell Wind “FAIR WINDS AND FLAT SEAS MY FRIEND!” Marks sense of adventure and his love for traveling to exotic places led to extensive trips around the world with his partner in life Pat . She recalled 2 special events that happened on their trip to South America. On a trip to Antarctica we rounded Cape Horn. It is said that if a sailor has rounded Cape Horn ,they were entitled to wear a Gold loop earring to signify the event .Immediately upon landing in Argentina ,we found a Gold earring and someone to put it in his ear which Mark never took off along with his coconut necklace which he acquired while traveling the islands of the South Seas . In Brazil which was the 1st stop of our journey in South America, Mark decided he wanted to change his appearance by having all of his hair shaved off. We went to an upscale Beauty Salon in Rio de Janeiro ,near our hotel ,where he was trying to motion with his hands what he wanted to have done. He didn’t speak Portuguese and no one spoke English. He spotted a razor and demonstrated by moving the razor from the front to the back of his head. Finally they got it! This was a place where you came to have your hair cut and styled - not shaved off! Quite an unusual request. As the process began everyone in this salon stopped what they were doing to watch Marks head being shaved People passing by on the street crowded the windows to get a glimpse of what was going on in this very fashionable beauty salon ! I laughed and laughed about the funny situation he was creating in this Salon as everyone was talking and laughing in a language I didn’t understand. They are probably still talking about this today! TRAVELING AND SAILING WERE MARKS TRUE PASSIONS IN THIS LIFE ON PLANET EARTH! He is survived by his sister Diane Weber, her husband Terry Weber of Bass Lake Indiana and her 3 daughters. Carolyn Weber Stigter of Mokena, Cadie Beatty of Mt Greenwood, Christine White of Bass Lake, Indiana- There are14 nieces and nephews MARK HAS NOW TAKEN THE MOST EXCITING TRIP OF ALL TIME - TO BE WITH THE LORD!

Mark W. Muehler from Mokena , who grew up in this community, currently residing in Homer Glen passed away on July 21st at Advocate Christ Medical Center in Oak Lawn from complications of a Heart Attack He was the first baby born in Joliet at... View Obituary & Service Information

The family of Mr. Mark W. Muehler created this Life Tributes page to make it easy to share your memories.

Mark W. Muehler from Mokena , who grew up in this community,...

Send flowers to the Muehler family.