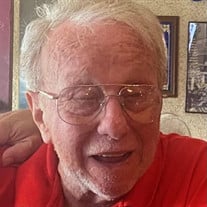 Lorenzo G Rossi Sr., beloved Husband, Father, Uncle, and Papa, passed away peacefully on October 15th, 2021. He was preceded in death by his wife, Beatrice (Ravellette) Rossi, parents, Sam and Laura Rossi, brothers, Sam, Jack, Jim, John and Fred Rossi and sister Minnie Rossi. He is survived by his four children, Lorenzo (Sherry) Rossi, Jr., William Rossi, Annette (Joseph) Siwinski and Nanette (Mark) Wirth, his grandchildren, Katie Rossi, Cassandra Lanoue, Jordan Rossi, Danny Rossi, Mathew Siwinski, Jade Rossi, Rowan Wirth, Alex Wirth, Jake Rossi and Madison Siwinski, his great grandchildren, Nevaeh Lanoue and Savannah Goggin, sister Patricia Voltattorni, sisters-in-law, Barb (Jack) Rossi and Adele (Sam) Rossi and numerous nieces and nephews. Larry, as he was called, had no issue with self-confidence, often referring to himself as El Supremo and jokingly insisting that his four children do the same. He had a great love for his family, Italian heritage, and spending time hunting with his sons and nephews. In recent years when his health wouldn't allow him to hunt, he would still make the "hunting trip" so he could sit at camp and talk with his family. His passions in life included farming, bee keeping, hunting, and above all else spending time with his family and friends. Larry had many jobs in his lifetime, most recently as a ticket agent for Metra. His love for people led to his feeling of fulfillment at this job. He was an Auxiliary Will County Police Officer for many years as well. He was a Knight of Columbus at his home parish of St. Patrick Catholic Church in Wilton Center. Lately you could find him every Wednesday at Little Al's having spaghetti and a glass of red wine for lunch. Visitation will be held on Wednesday, October 27th from 3:00 PM - 8:00 PM at Vandenberg Funeral Home, 19604 Wolf Road Mokena, IL. Funeral, Thursday, October 28th, 9:30 AM at Vandenberg Funeral Home to St. Mary Church, Mass at 10:00 AM. Interment to follow in Skyline Memorial Park Cemetery. For information on services, 708-479-1210.

The family of Mr. Lorenzo G. Rossi created this Life Tributes page to make it easy to share your memories.

Send flowers to the Rossi family.