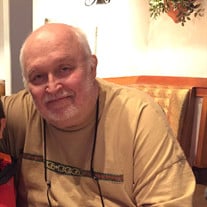 Lewis Zimpelmann, age 67, of Mokena, peacefully took his last breath March 23, 2018 after the devastating effects of a paralyzing stroke. Preceded in death by his wife, Sharon Zimpelmann and both his parents, Lewis and Shirley Zimpelmann. Survived by his children; Jason (Leila) Zimpelmann, daughter, Jamie Zimpelmann; grandfather to Charlie, Andrik and Adrienne Zimpelmann; brother to Gail Barilka and Paul (Denise) Zimpelmann. Beloved Uncle and Great Uncle to many nieces and nephews. Born June 5, 1950 in Rocky River, Ohio, Lew was the middle child of three. After graduating Lutheran West High School, he continued his education at Ohio State University. Before the start of his junior year, Lew was drafted into the Army.  After basic training, he trained at Ft. Lee in Virginia where he became a member of the 82nd Airborne. He then finished his service at Ft Bragg in Fayetteville, NC. After Lew was discharged from the Army in 1973, he moved back to Ohio. Once home, he was fortunate to have crossed paths with Sharon Ternig at Messiah Lutheran Church in Fairview Park, Ohio in 1975. They fell in love and were married June 18, 1977. Two years later, in 1979, they were blessed with their first child, Jason. Lew’s job with Aetna Insurance took the family across the country to Hartford, Connecticut. They remained there for a year and a half, but Sharon wanted to be closer to family, so they moved back to Illinois in 1981. Their family was complete with the birth of their second child, Jamie, in 1982. After the military, Lew spent most of his career as an insurance agent, but his true calling was being a family man. After the children had grown and his wife Sharon’s MS symptoms started progressing, Lew then stepped into the role of full time caretaker until Sharon’s death in 2017. Lew loved his family, but his grandchildren were his greatest joy. HIs first grandchild, Charlie, even shared his same birthday! He was a kind, gentle man with a sweet soul that was easy to love. We will miss his smile, infectious laughter, numerous stories and jokes, even the bad ones! We grieve our loss but rejoice for his gained freedom in his new heavenly body, free of sickness and pain. At the time of the family planning Sharon’s funeral, Lew joked how we should do a 50/50 raffle because, “Who goes to a funeral and leaves with money?” His children said, “No, but we’ll honor that for yours!” So yes, there will be a 50/50 raffle, so please come with cash! The family is also asking you come prepared with stories to share about Lew. Military Service will be held Wednesday, April 11, 2018 at 1 pm at Abraham Lincoln Cemetery, 20953 W Hoff Rd, Elwood, IL 60421. All are welcome, but please arrive 15 minutes early. There then will be an open house with the family at the VFW Post 9545 in New Lenox, IL, located at 323 Old Hickory Rd. from 3-7 pm on April 11, 2018. This is a celebration of the life, and humor of Lew… so a cash bar and the 50/50 raffle will really occur.

Lewis Zimpelmann, age 67, of Mokena, peacefully took his last breath March 23, 2018 after the devastating effects of a paralyzing stroke. Preceded in death by his wife, Sharon Zimpelmann and both his parents, Lewis and Shirley Zimpelmann. Survived... View Obituary & Service Information

The family of Mr. Lewis Zimpelmann created this Life Tributes page to make it easy to share your memories.

Send flowers to the Zimpelmann family.