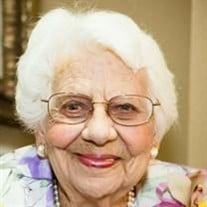 June C Lauffer, 91, passed away August 9, 2015 in Sugar Land, TX. She is predeceased by her husband of 68 years, Edward Lauffer. She is survived by her daughters Susan Lauffer, Bonita Fox (John), Patricia Davies (Russell); grandsons Brian Fox (Stephanie), Jason Fox (Denise); great grandchildren, Collin, Henry, and Vivienne Fox. She is predeceased by her brother Robert J. Waters, Jr. and her parents Robert J. and Lillian Waters. June was born in Chicago Il June 20, 1924. She was engaged and married in 1945 after Edward returned from active service in Europe WWII. They raised three daughters and worked together in his hardware business for 20 years in Frankfort, Il. They retired to Austin, Texas in 1971 where they resided for 35 years and moved to Sugar Land in 2005. June was a lifetime member, baptized, confirmed and married in the Lutheran Church and served as teacher, women's group leader, and volunteer in out reach programs. Lillian Waters began a Sunday School in 1943 which grew into the mission development of Palos Evangelical Lutheran Church and where June served teaching Sunday School as a high school student. Edward and June were Charter Members of Good Shepherd Lutheran Church in Frankfort, 1956. Devotion to her church remained an integral purpose for June, age 90, when she and Pastor Allen Bauer with Fishers of Men Lutheran Church organized monthly communion services at Greatwood Assisted Living where she was living. Other interests are knitting, crocheting and tatting, skills learned from her mother for making crafts and gifts for family and friends. June used her beading skills designing Chrismons and organizing the Christmas tree service project at Redeemer Lutheran Church in Austin. She considered her faith and her family her greatest blessings in life and will be remembered by all who knew her for her warm loving spirit. The funeral service will be held Thursday, August 13 at 11:00 am at Fishers of Men Lutheran Church, 2011 Austin Parkway, Sugar Land, TX., 77479. The visitation will be held from 10:00 am to the time of the service. Internment will be Saturday, August 15 at St. John's Cemetery, Mokena, IL following a visitation and service at 10:00 am at Vandenberg Funeral Home, Mokena, IL. In lieu of flowers memorial donations may be made to Fishers of Men Lutheran Church and Good Shepherd Lutheran Church, 295 Sauk Trail, Frankfort, Il 60423.

The family of Ms. June C. Lauffer created this Life Tributes page to make it easy to share your memories.

Send flowers to the Lauffer family.