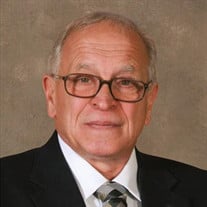 John J. Mazzorana, age 75, was born May 14, 1943 in Chicago, IL and passed away on May 27, 2018 in New Lenox, Illinois. John was preceded in death by his parents, Anthony and Elsie Mazzorana and his wife, Claudia. John is survived by his loving children Vicki Mazzorana M.D., Michelle Stokes (Roy), Katherine Wilson, Jason Mazzorana (Angie) and Anthony Mazzorana; his beloved grandchildren Jacob Wilson, Madeline Wilson and Gianna Mazzorana; his brother Dennis Mazzorana (Therese); his caring companion of many years, Sandy Meinke, and her daughter Amanda Wrobel; and many nephews and nieces. John was a graduate of Mendel Catholic High School (1961), DePaul University, B.A. (1965) and DePaul University Law School, J.D. (1968). John was a practicing attorney in south Cook County and Will County for 50 years. He loved the practice of law and the people he represented. Although born and raised in Chicago, John and his family moved to Mokena in 1976 where he raised his five children and adopted Mokena as his home town. John devoted himself to the Village of Mokena and its residents for more than 30 years. He was elected to the Mokena Park District Board of Commissioners in 1987 and served as the Board President until 1993. He was elected to the Mokena Village Board of Trustees in 1993 and was reelected for 5 consecutive terms until his retirement in 2018. John was especially proud of having served the Village during its period of greatest growth 1993-2007 and the great recession of 2008-2011. Through everything Mokena prospered. John was also active in the Mokena Area Historical Society, the Mokena Chamber of Commerce and numerous other organizations. For many years, John served as the voice of Mokena’s Annual 4th of July parade. Visitation will be Sunday, June 3, 1:00 p.m. to 8:00 p.m. at Vandenberg Funeral Home, 19604 Wolf Road, Mokena, IL. There will be a memorial service on Monday, June 4 at 11:00 a.m. at Tuscany Falls Banquets, 9425 W. 191st Street, Mokena, IL. Internment will be private. Memorials to the Mokena Area Historical Society or St. John’s United Church of Christ would be appreciated by the family.

John J. Mazzorana, age 75, was born May 14, 1943 in Chicago, IL and passed away on May 27, 2018 in New Lenox, Illinois. John was preceded in death by his parents, Anthony and Elsie Mazzorana and his wife, Claudia. John is survived by his loving... View Obituary & Service Information

The family of Mr. John J. Mazzorana created this Life Tributes page to make it easy to share your memories.

Send flowers to the Mazzorana family.