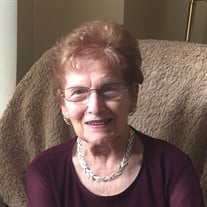 Joann Orcutt Marshall, age 87, passed away on Thursday, Jan 12, 2017 after a long battle with dementia and the complications of a broken hip. Born in Chicago, she was the adopted daughter of Carroll and Mary Orcutt and had an adopted brother, Bob. Her father was a newspaper editor and was transferred often, so she attended 12 different schools in several states. She attended Ripon College in WI where she met the love of her life, Jim, her freshman year. He was finishing college after returning from WWII. They were married in Sept 1948 and settled in Chicago, where son, Larry, was born. The Army Reserve called up Jim and sent them to WY, where Cathy was born. Two years later they settled in Tinley Park where they loved raising their family and added Deb in 1959. Joann was born to be a mother and took great joy in being an involved parent--in Cub Scouts, in many functions of the Tinley Park Methodist Church, Recording for the Blind, the Community Center Foundation and Garden Club. She enjoyed being a hostess for Welcome Wagon for 35 years. She was amazed by nature and loved gardening and animals with a passion. She was kind and giving and gracious and always saw the best in people. She was adored by her family, Larry Marshall of AZ, Cathy (Gary) Germeraad of SC, and Debbie (the late Scott) Lynch of Tinley Park; 6 granddaughters, Julie (Dustin) James, Jodi Smith, Laurie (Cameron) Kagay, Brianna (Pat) Meinke, Madeleine Lynch and Elizabeth Lynch; and 9 great grandchildren, Cooper, Ella and Jack Henry Smith, Sydney and Trevor James, and Owen, Charlee, Amos and Samuel Kagay, and her special honorary sister, Dolores Genis. She was preceded in death by Jim in 1996. She is also survived by her family at Sunrise Memory Care, where they have provided her with love and respect during her journey with dementia. There will be a memorial service at 11am on Monday, Jan 16, with visitation at 10am at the Tinley Park Methodist Church. In lieu of flowers, there will be a memorial to Recording for the Blind and The Alzheimer’s Assn.

Joann Orcutt Marshall, age 87, passed away on Thursday, Jan 12, 2017 after a long battle with dementia and the complications of a broken hip. Born in Chicago, she was the adopted daughter of Carroll and Mary Orcutt and had an adopted brother,... View Obituary & Service Information

The family of Ms. Joann Marshall created this Life Tributes page to make it easy to share your memories.

Send flowers to the Marshall family.