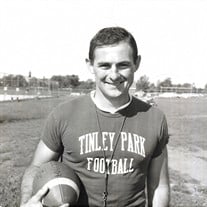 James (Jim) Richard Fredenberger passed away peacefully in his sleep on Saturday, November 23, 2019. Jim was born August 29, 1932, in Marshall, Illinois, a small town just west of the Indiana border in central Illinois to his parents Glenn and Helen Jane. His sister Ann Lee, 4 years his junior, died at the age of 10. Jimmy Dick as he was called as a youngster spent much time at his devoted grandmother Nina Smith’s home. She adored Jimmy Dick and allowed him to do anything he wanted, which included playing with rocks in her bed – while she was in it – smashing them against each other. He was also influenced by his uncles, Bill and John Fredenberger, who played basketball and football. Jim graduated from Marshall High School in 1950 where he participated in clubs, pole vaulted on the track team, and played basketball and football. To say he loved sports, especially football, would be an understatement. Jim went on to Eastern Illinois University where he continued to play football. Coming from a long line of teachers, he majored in Social Studies with the hopes of teaching but more so coaching at the high school level. After serving in the Army in Germany, he returned to Illinois and taught and coached basketball and football in several small towns, including Casey, Ridge Farm and Bement. While at Casey, he met Kathryn Mankin who declared when she met him, she knew she would marry him. They were married on June 7, 1959. They welcomed their daughters Jane Ann into the world in 1961 and Julia Kay in 1963. Jane Ann was born with special needs and the family moved up to the Chicago area for better services. Jim became a teacher and assistant football coach at Tinley Park High School in 1966 and ultimately head coach in 1968. His Titan teams during the 70s were among the best in the state – at one point having a 24 game winning streak. Jim was inducted into the Illinois High School Football Coaches Hall of Fame in 1990 with an overall record of 96-39-1. After retiring from teaching and coaching, he was able to spend more time fishing, a passion he enjoyed throughout his life. Jim leaves behind his loving wife, Kathryn, his daughter Jane Ann, his daughter Julia Goodwin, son-in-law Tony Goodwin, and grandchildren Maxwell and Hattie Goodwin. Visitation will be at Vandenberg Funeral Home in Tinley Park on December 7, from noon to 2 pm, with a Celebration of Life ceremony at 2:00 pm. In lieu of flowers, a donation can be made to Park Lawn Association online at parklawn.com or mailed to Park Lawn Association - Attn: Development Dept. - 10833 S. LaPorte - Oak Lawn, IL. 60453. Envelopes will also be available at the funeral home.

James (Jim) Richard Fredenberger passed away peacefully in his sleep on Saturday, November 23, 2019. Jim was born August 29, 1932, in Marshall, Illinois, a small town just west of the Indiana border in central Illinois to his parents Glenn and... View Obituary & Service Information

The family of Coach James R. Fredenberger created this Life Tributes page to make it easy to share your memories.

James (Jim) Richard Fredenberger passed away peacefully in his...

Send flowers to the Fredenberger family.