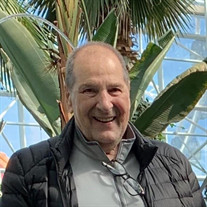 James “Jim” L. Disabato, of Alsip, passed away at Palos Hospital on Friday, November 27, 2020 at the age of 81. His loving wife, Dian and their eldest son, Jeff, were present to say their last “I love you” before he departed. Jim was born on November 17, 1939 in Blue Island, to Pasquale and Louise (nee Guglielmucci) Disabato. On May 28, 1960, he married his lovely wife Dian, and just last spring, on May 28, 2020, they celebrated their 60th wedding anniversary. If you knew Jim, you know he was happiest when he spent time with his four wonderful children: Jamie, Jill, Jeff, and Greg and all of his grandchildren. He treasured his memories of their family adventures and gatherings. His particular favorite family pastimes were golfing, fishing, celebrating Christmas Eve, watching his grandkids’ sports events, and, as much as possible, traveling to Arizona to visit his son Greg’s family. After more than 50 years in the printing industry where Jim served as a great asset to many companies, he spent his retirement celebrating his children’s and grandchildren’s lives with wife Dian at his side. Jim’s love of being a grandfather was captured in the statement someone once made: “Grandparenting is the stage in life when you finally understand the meaning of the best is yet to come…because you reached it!” Jim was preceded in death by his parents, Pasquale and Louise, his sister, Virginia Harczak and his brother, Edward. He is survived by his wife Dian, his daughters Jamie (Mike) Oelschlager and Jill Disabato, his sons Jeff and Greg (Kate) Disabato, his sister Josephine Wozniak and his beloved grandchildren Kari, Derek, Anna, Christopher, Benjamin, Gianna, and Tyler. Due to the current Covid restrictions, the family will not be having services at this time.

The family of Mr. James L. Disabato created this Life Tributes page to make it easy to share your memories.

Send flowers to the Disabato family.