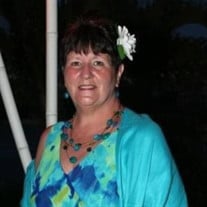 Jacqueline “Jackie” Trino, daughter of the late Jack and Lois Freitag, was born November 8, 1948 in Blue Island, IL. She was a graduate of Tinley Park High School, class of 1966, and an active member of the greater Tinley Park community growing up. She worked a variety of jobs after high school, until she made a home with Formax Corporation (now Provisur) of Mokena in the mid-1970s where she worked as an accounting clerk for more than 30 years. In 1979, she married her husband of more than 25 years, the late Anthony “Tony” Trino, and built a home together in New Lenox, IL. In 1984, the couple welcomed their only son, Christopher to the Trino family. Jackie remained active following her 2014 retirement from Provisur corporation, working part-time at TJ Maxx (New Lenox) and Mariano’s Fresh Market (Frankfort). Jackie remained a resident of New Lenox until the fall of 2019, when she relocated to Sunny Hill Nursing & Rehabilitation (Joliet). Jackie was an outgoing, personable and supportive member of the community. She routinely gave to charity, her favorites included wounded veteran funds, Purple Heart, the Red Cross and the American Cancer Society. She loved being a grandmother, cousin, sister, daughter and mother. Some of her favorite activities were playing solitaire, shopping, spending time with her granddaughters and watching “Dancing with the Stars.” Jackie is survived by her son Christopher and his wife Lauren (Simonaitis) and their children Ava and Madelyn, her brother Mark and his wife Nancy Freitag, her sister Ruth Ellen Doyle (Freitag), her sister-in-law Julie Frank (Trino) and her nieces and nephews Samantha Grosche, Jacob Boersma, Shawn Pack, Kelly Pack and Lance Pack. In addition, Jackie is also survived by many of her extended family including cousins in the Bettenhausen and Kott families. Jackie is preceded in death by her husband Anthony Trino, parents Jack & Lois Freitag, brother-in-law’s Michael Trino, Thomas Pack, Ed Doyle and Harry Frank, as well as several extended family members in the Trino, Bettenhausen, Millis and Kott families. A burial service is planned for Friday, December 4 at Beverly Cemetery. The family wishes to extend our sincere gratitude to the nurses and staff at Sunny Hill Nursing & Rehabilitation as well as the Joliet Area Community Hospice.

Jacqueline &#8220;Jackie&#8221; Trino, daughter of the late Jack and Lois Freitag, was born November 8, 1948 in Blue Island, IL. She was a graduate of Tinley Park High School, class of 1966, and an active member of the greater Tinley Park community... View Obituary & Service Information

The family of Mrs. Jacqueline A. Trino created this Life Tributes page to make it easy to share your memories.

Jacqueline “Jackie” Trino, daughter of the late Jack and Lois...

Send flowers to the Trino family.