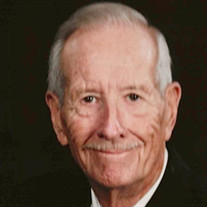 Howard Mack Turner, 95, beloved husband of the late Rita Catherine Turner, died on Friday, February 20, 2020, peacefully at home, with his family present. A decorated WW II veteran, in 1944 Mr. Turner was on the first tank to liberate Paris. Later he served, in 1945, as a member of General Eisenhower’s staff that prepared the Act of Military Surrender, signed by Nazi Germany’s High Command. Born September 19, 1924, of humble beginnings on a family farm in Fort Blackmore, VA, through courage, determination, and indefatigable vision and unwavering faith in God’s love, he completed his college education earning two engineering degrees, married Rita, the love of his life, helped to raise their five children, and obtained his private pilot’s license to support his passion for flying. In his professional career, he attained positions of Vice President, Research and Engineering, at Ludlow Papers and Flexible Packaging, and General Manager, Plastics Technology, at Continental Group, with more than 100 US Government technology-related patents credited to him during his career. Mr. Turner was a founding member and generous benefactor of the Hickory Creek Community Church, Frankfort, IL. He is survived by his children, and their dedicated and loving spouses: Dr. Gregory Turner of Tallahassee, FL; Timothy and Donna Turner of New Lenox, IL; Margaret and James Roberts of Mokena, IL; and Christopher and Kelly Turner of Chicago, IL. He is also survived by 9 grandchildren, 14 great grandchildren. Reception and viewing is February, 25, 2020, from 3 – 9 pm, at the Vandenberg Funeral Home, 19604 S. Wolf Road., Mokena, IL. Entombment is scheduled for Wednesday, February 26, 2020, in the Catholic Cemetery, Fort Wayne, IN.

The family of Mr. Howard M. Turner created this Life Tributes page to make it easy to share your memories.

Send flowers to the Turner family.