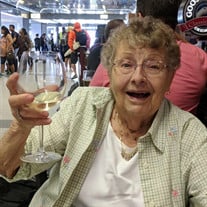 Hammond, Gloria M. Age 88 late of Tinley Park, IL. Beloved wife of Earl; loving mother of Earl Jr. (Peggy), Thomas (Aleen) and Scott (Anne) Hammond; proud grandmother of Earl III, Patrick, Marie, Kristian, Heather, Ryan, Nora and Scott; great grandmother of Laine and Will. After graduating Eisenhower High School in Blue Island, Gloria met Earl after he returned from his naval service during the Korean war. He swept her off her feet and they married on May 22, 1954. They moved to Tinley Park in 1957 and raised their three sons in a modest house on Oleander Avenue. Earl and Gloria stayed together in the Tinley Park home for almost 60 years until Earl’s death in April of 2014. For many of those years, Gloria worked at the Jewel grocery store in town as a cashier and entertained many Tinley Park residents as she rang up their purchases. Together with Earl, she provided her three sons with the blueprints for a happy marriage, successful parenthood, and a rewarding retirement that included constant enjoyment of her grandchildren. She had a great laugh, an infectious sense of humor, and no question – as her grandkids will attest – was off the table. Yet, coming from her, it was never offensive and always funny. In 2020, Gloria moved to Smith Crossing in Orland Park at the start of the pandemic. She was fortunate to have her friend, Jan, in the apartment next to her during these trying times. She enjoyed her dinners in the dining room with Jan and her other friends, as well as her weekly trips to Bailey’s in Tinley Park for a pork chop sandwich and a couple generous glasses of wine. Gloria and her laughter will be missed dearly by everyone who knew her. A private service and interment will be held by her family at Vandenberg Funeral Home in Tinley Park. In lieu of flowers, donations to: The Greater Chicago Food Depository, www.chicagosfoodbank.org.

The family of Mrs. Gloria M. Hammond created this Life Tributes page to make it easy to share your memories.

Send flowers to the Hammond family.