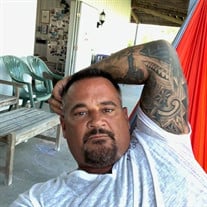 Frank M. Russo, 53, of Frankfort, passed suddenly at home Saturday, April 6th, 2019. Frank was born August 10, 1965, in Blue Island, Illinois. He dedicated his life to the first responder community. After returning from the United States Marine Corps in 1986, he began his career as a Crestwood police officer. He later owned and operated ambulance companies in the Chicagoland Area. He spent his summers the last 15+ years “in the trenches” with his team at Entertainment Medical Services. He was passionate about the Marine Corps and serving them through USMC Mentor for Life. Frank also served as a Board Member for Northwest Community Medical Center Foundation. He will be remembered most for his adventurous spirit, living life to its fullest and driving in the fast lane. Notably having taken up sky diving in the last several years where he made many friends in the sky. Frank is survived by his children, Amber, Ashley (spouse Kevin Lanigan), Alex, and Aubrey shared with former spouse Lisa. He was also a loving grandfather to Nicolas (Bajgrowicz). He will be deeply missed by fiancé Ann (Caldwell). We will all remember him for his big heart and the kindness that he showed to so many. Frank is preceded in death by father, Joseph ‘Sonny’, brother Joe, and grandparents Joseph Sr. and Mary (Vaccaro) Russo. Visitation will be held from 3 - 9 p.m., Thursday, April 11th at the Vandenberg Funeral Home in Tinley Park, IL; Funeral Service on Friday at 10 am at Vandenberg Funeral Home, followed by burial at Holy Sepulchre Catholic Cemetery followed by luncheon memorial. Contributions in memory of Frank M. Russo may be made to the Wounded Warrior Project online at https://support.woundedwarriorproject.org or via mail at PO Box 758517 Topeka, Kansas 66675-8517.

The family of Mr. Frank Michael Russo created this Life Tributes page to make it easy to share your memories.

Send flowers to the Russo family.