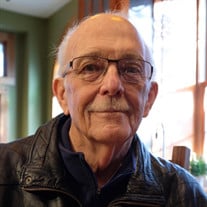 Edward C. Senn, 79, and a resident of Mokena (formerly of Chicago Heights) passed away on Tuesday, May 12th at the Riverside Kankakee Medical Center. He is survived by his wife, Kazimiera Senn, two daughters, Beth Brouwer (Wayne) (New Lenox) and Lisa Bode (Russ) (Grygla, MN), two step-children, Anita Brozyna (Wesley) (Shorewood) and Irek Zmudzki (Agnieszka))( Orland Park). He was blessed with several grandchildren (Ron McManus, Kristin Reid, Alex Brouwer, Miken Dwyer, Tabitha Nessel, and Nicole Brozyna) and great-grandchildren, (Darren Boardman, Charlie Reid, Jaycee Reid and Noah Brouwer). He was preceded in death by his wife, Gail A. Senn Married(1960-1993) and daughter, Sharon Senn. Edward served in the 101st Airborne in Fort Campbell, Kentucky from 1959 – 1962 earning medals in parachuting, marksmanship, and sharpshooting. His love and respect of the military and his country was evident in all that he did throughout his life. When you saw him, his camouflage hat was always worn, with his military pins attached. He never let a veteran walk by without thanking them for their service. He loved going to the gun range and bullseyes were his specialty. He was an extremely organized man, with everything always in its place. He paid attention to detail in all that he did. After his retirement from Material Service in Lockport, he embraced life and all that it had to offer while always looking forward to visits from his children and grandchildren, valuing their education every step of the way. He loved the visits from his childhood friends and his neighbors. You would often see him grabbing his fishing pole and minnows, heading to the river for the day, taking daily walks with his homemade walking-stick, and even taking up wood-carving later in life making incredibly detailed carvings. He enjoyed going to the gym and could often be seen weight-lifting with people half his age. He also loved working in his yard planting beautiful plants that show up every year. The yard he shared with his wife is often referred to as a “victory garden” due to its pristine beauty and attention to detail. Edward even learned much of the Polish language to engage with his loving extended family. He was a lifelong learner of so many things. Edward valued and respected the opinions of the doctors and nurses that cared so deeply for him. Throughout his journey, he would often refer to each of them with the highest regard, following their lead with immense trust. Edward was beloved by so many while holding intensely special relationships with those he held dear. He was a man of great faith to his God and prayer was in his daily routine. He will be missed and will be remembered day in and day out. His words of which he referred to as “planting the seeds” will grow with his family and friends forever. In this time of spring renewal, “planting the seeds” has never had more meaning. May he rest in peace as God surely welcomed him home with open arms. Funeral services are being held privately for family members in accordance with all current state and federal recommendations. We ask that you show your love and support for the Senn family by leaving them a condolence on our website.

Edward C. Senn, 79, and a resident of Mokena (formerly of Chicago Heights) passed away on Tuesday, May 12th at the Riverside Kankakee Medical Center. He is survived by his wife, Kazimiera Senn, two daughters, Beth Brouwer (Wayne) (New Lenox)... View Obituary & Service Information

The family of Mr. Edward C. Senn created this Life Tributes page to make it easy to share your memories.

Edward C. Senn, 79, and a resident of Mokena (formerly of Chicago...

Send flowers to the Senn family.