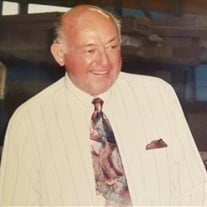 Edward H. "Bud" Bruske III, of Frankfort, IL, died of natural causes Saturday, April 11, 2020, three days shy of his ninety-first birthday. Mr. Bruske was born in Chicago, IL, and while growing up he took whistling lessons, raised bees and attended North Park Academy High School where he played basketball and football. He attended Northwestern University, joined the National Guard and was activated for duty into the Army during the Korean War. He was an accomplished showman and breeder of Labrador retrievers, an expert pilot of small aircraft and he and his wife, Priscilla, traveled the world in their later years. He was the founder of Bruske Products in Tinley Park, IL, a small manufacturing and janitorial supply company that actively produces and distributes brooms, sweeper brushes, the "Indestructible Bruske Brush" and the "Buddy Brush" and was involved in the business until his death. He is survived by his high school sweetheart and wife of sixty-nine years, Priscilla; his sister, Barbara Perloff, of Appleton, WI; son Ed Bruske of Cambridge, NY; four daughters, Diane Bruske, Susan Bruske and Laura Crisman—all residing in the Chicago area—and Linda Bruske, of Boynton Beach, FL, as well as eight grandchildren and two great-grandchildren. Mr. Bruske will be buried in the Abraham Lincoln National Cemetery, located in Ellwood, IL, and a memorial service with full Military Honors will be held at a later date. In lieu of flowers please make a donation in his name to the Salvation Army.

The family of Mr. Edward H. Bruske created this Life Tributes page to make it easy to share your memories.

Send flowers to the Bruske family.