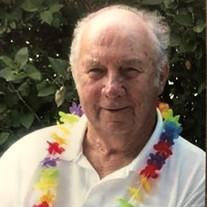 Donald J. Petersen, 96, of Tinley Park, Illinois passed away on November 29, 2019. A veteran of World War II, he served proudly in the US Coast Guard in the North Atlantic aboard the USS Nourmahal as a Motor Machinist Mate, 1st Class, acquiring the mechanic skills that would serve him his entire life. Don was born April 28, 1923, the middle son of Mary Lillian (Crowley) and Frederick Henry Petersen. He grew up in the Back of the Yards neighborhood in South Chicago, graduating in 1942 from Tilden Tech High School, where he would excel in wrestling and football, winning a City of Chicago heavyweight wrestling title and placing 2nd in the state tournament. Friendships forged on the 1941 Tilden football team that would take the Chicago Public School crown were enjoyed for many decades. He attended the University of Iowa on a football scholarship before enlisting in the Coast Guard. On a weekend leave, he married his high school sweetheart, Mary Mae Southard on October 11, 1944. Together they moved “to the country” and built a home there in 1953 where they raised their four children. After a career as a mechanic, Don retired from UPS in 1986 as an automotive service manager. He could fix anything with a motor. A man of many talents, Don enjoyed creating stained glass art and woodworking, creating many mementos, including clocks for his children and grandchildren. A true lawn ranger, he mowed over 5 acres each week. After retirement, he volunteered as a transporter at South Suburban Hospital. He most enjoyed providing an escort for new moms and their babies as they left the hospital. Don was a member of St. George Catholic Church (Tinley Park), St. Leo the Great (Bonita Springs, Florida), the VFW and AMVETS. Don is survived by his four children, sons, Donald Petersen II of Frankfort, IL and Michael (Josephine) Petersen of Duncannon, PA; daughters, Marjorie [Missy] (Bob) Layfield of Fort Myers Beach, FL, and Mary Ellen (Dave) Rix of Wheaton, IL; his grandchildren Nora (Matt) Flanagan, Michael (Kimber) Petersen, Lara Petersen, Katie (Jon) Schoppy, Christine Weidner, Craig Petersen, Christopher Layfield, Matthew (Kim) Layfield, Joel (Christina) Layfield, Mary Kate (Ray) Jenkins, Annie Rix and Nathan (Kristin) Rix. He is also survived by 15 great grandchildren: Hayley, Joseph, Kevin, J.D., Lily, Henry, Lauren, Ryan, Ian, Mason, Anna, Jack, Claire, Griffin and Brooks, and numerous nieces and nephews. He was preceded in death by his wife Mary Mae, grandson Donald J. Petersen III and brothers Ray and Bob. A wake will be held at Vandenberg Funeral Home, 17248 Harlem, Tinley Park, from 4-8pm on Friday, December 13, with shared remembrances at 6pm. A Funeral Mass will be celebrated at St. George Church, 6707 175th St., Tinley Park, on Saturday, December 14 at 11:30am, followed by interment at Holy Sepulchre Cemetery, Alsip. In lieu of flowers, donations to Don’s favorite charity, St. Vincent DePaul, St. George Parish, 6707 W. 175th St, Tinley Park, IL, would be welcomed.

Donald J. Petersen, 96, of Tinley Park, Illinois passed away on November 29, 2019. A veteran of World War II, he served proudly in the US Coast Guard in the North Atlantic aboard the USS Nourmahal as a Motor Machinist Mate, 1st Class, acquiring... View Obituary & Service Information

The family of Mr. Donald J. Petersen created this Life Tributes page to make it easy to share your memories.

Send flowers to the Petersen family.