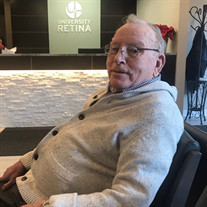 Desmond Joseph McCarthy, 94, of Lemont, Illinois, passed away January 5th. Formerly of Boca Raton, Florida; Tinley Park, Illinois; Chicago, Illinois; London, England. Born in the Rhondda Valley in Wales in 1925. Survived by Ellen McCarthy of Evergreen Park; daughters Ann Marie (Joe Thouvenell) McCarthy; Mary Catherine (Michael) Burke; sons John (Mary Beth) and Patrick (Shayna). Survived by eleven grandchildren and six great-grandchildren. A veteran of WW II as a member of the British Royal Navy, Desmond served as a naval air mechanic stationed first in Kirkcaldy, Scotland, and then on an aircraft carrier in the Mediterranean Sea. Before his military service, he grew up in London and lived through the Blitz on London and the Battle of Britain, which he described in his book My Eternal Heroes. In 1948, he immigrated to Chicago and became a U.S. citizen in May of 1957, the first step in his development as an outspoken and patriotic American. Throughout the 1950’s he played on high-level amateur soccer teams, including Chicago Sparta ABA. Desmond was an avid singer who could hold a crowd’s attention, who loved all forms of music and respected a good vocalist, no matter their background or origin. Desmond lived with gusto and expressed his opinions the same way to anyone who would listen. He donated to worthy causes and always had a buck for a poor soul. He was an avid Chicago Bears fan and season ticket holder since 1958, when they played at Wrigley Field. He was proud of his 70-year membership to Plumbers Local 130. He is preceded in death by his father Timothy McCarthy, mother Catherine (O’Flynn); brothers Timothy, John (Doreen), Jeremiah (Mary), and Stephen;and sisters Mary (George) Owen, Anne (David) White, and Veronica. He will be missed, but his memory lives on. Wake to be held Thursday, January 9th from 5-8 p.m. at Vandenberg Funeral Home, 196th and Wolf Road, Mokena, Illinois. Funeral is Friday at 10:00 a.m. at St. George Church in Tinley Park, Illinois. In lieu of flowers please donate to St. Jude’s Children’s Hospital or Boystown.

The family of Mr. Desmond McCarthy created this Life Tributes page to make it easy to share your memories.

Send flowers to the McCarthy family.