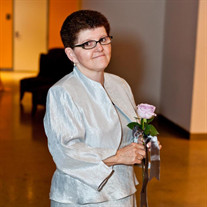 Deborah Margaret Beck (Freebairn) Born to Douglas Williams and Patricia Tatgenhorst at Great Lakes Naval Base on January 12, 1954, Deborah Margaret Beck (Freebairn) passed suddenly in the early morning of June 5, 2020 at the young age of 66. Debbie, as many knew her, worked as a CNA for 22 years at a local nursing home where she shared much love with her patients. Debbie had a heart of gold, and every person she encountered was met with a smile and a joke. She was the life of the party, had a big personality, and showed everyone unconditional love. Debbie wanted more than anything to have a family. On October 25, 1975, she married the love of her life, Donald Freebairn. After many struggles, she had her first daughter, Heather, and then Amy followed a year later. Both Heather and Amy share the same birthday of February 14.  She was blessed with being a Nana to three grandkids: Becca, Johnny, and Hope. Debbie loved spending time with her family and being surrounded by those who loved her. Debbie is the oldest of eleven siblings whom she loved unconditionally. Debbie is survived by her two daughters, Heather (David) Murphy of Dallas, TX, and Amy Freebairn of Boulder, CO; her grandchildren, Rebecca, Johnny, and Hope; nine siblings; many nieces and nephews; and her mother.  She was preceded in death by her father, Douglas, stepfather, Richard, and brother, Timmy. Debbie’s Celebration of Life will be held virtually on July 8, 2020 and led by her favorite pastor and niece, Crystal Gutierrez. Flowers can be sent to Vandenberg Funeral Home, 17248 S. Harlem Ave Tinley Park, IL 60477. Flowers will be donated in Debbie’s memory to a local nursing home following the service. A memorial page has been created to remember Debbie’s life including a virtual guestbook, tributes, photo gallery, and memories: http://www.never-gone.com/Memorials/debbiebeck

The family of Ms. Deborah M. Beck created this Life Tributes page to make it easy to share your memories.

Send flowers to the Beck family.