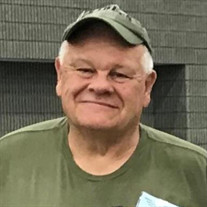 EVANS, DAVID DENIS David Evans, 73, of Mokena, IL entered Valhalla the morning of October 23, 2021. He was born on August 10, 1948 in New Orleans, Louisiana, the son of David and Ethel (Engblom) Evans, both deceased, and loving nephew of Kenny Engblom and Nels Engblom, both deceased. He is survived by his heartbroken wife of over 33 years Debbie (Webb), daughter Julie; and in-laws, William and Dorothy Webb. He is also survived by numerous cousins especially Marty (Gloria), John (Ronie dec.) and Bill (Linda) Engblom with whom many shenanigans happened. In 1968, when David was 19, he enlisted in the Navy Seabees. He was a proud U.S. Navy Veteran – Seabees (BU3), served in-country Vietnam 1968-1969, where he was exposed to Agent Orange U.S. Naval Mobile Construction Battalion 8 / U.S. Pacific Fleet Medals National Defense Service Medal Vietnam Service Medal w/ one Star Fleet Marine Force Combat Insignia Vietnam Campaign w/ Device After he was discharged and came home in August, 1969, the first thing he did was attend Woodstock. In 1970, he met his best friend, Denny Shea (Nancy) who survives him. Many more shenanigans ensued, some including the Engblom brothers. David married in 1973 and had his daughter, Julie, in 1976. He then divorced. After his divorce, David met the love of his life, Debbie, also divorced. Most people said that he definitely met his match and that they were a match made in heaven. They were married on April 1, 1988. As David used to say, “you marry a second time, you’re a fool”. They loved to travel in the U.S. and there are very few states that they never got to see. David also took his dream trip, alone, in a 19 ft boat down the Mississippi River to Mobile, Alabama. Debbie and David also traveled to Ireland for her heritage and she promised him that when he turned 65, they would travel to Sweden for his heritage. They arrived in Copenhagen on August 10, David’s 65th birthday. They visited Denmark, Norway and Sweden for almost 4 weeks. David rekindled his friendship with Joe Werner in 2012 and in 2014 The Veterans Garage was started. David dedicated countless hours volunteering with The Veterans Garage providing his 5 Ton Military Truck for transportation of Veterans in Parades, Welcome Home Ceremonies, Funeral Processions, Veteran Birthdays, USO Support and many other Veteran related events. David also took part in The Honor Flight Chicago on August 6, 2019 together with his friend, Denny. This trip meant the world to him. Dave recently (in June of 2021) traveled to California to visit Port Hueneme, his Duty Station and Home of the U.S.Navy Seabee Museum (where he was given a private tour of the Museum and it's Archives). Sincere thanks to Lightways Hospice and Serious Illness Care, especially Nurse Nancy and Starla, for letting David cross over with comfort and dignity. A memorial service will take place on Wednesday, November 3, 2021 at Vandenberg Funeral Home, 19604 Wolf Road, Mokena, IL from 3:00-8:00PM. Funeral Service Thursday, November 4, 2021, we will leave Vandenberg Funeral home at 9:30 AM accompanied by a military truck escort to Abe Lincoln National Cemetery in Elwood, IL. MASKS ARE MANDATORY. In lieu of flowers please make a donation in David’s name to The Veterans Garage, 10712 First Ct., Mokena, IL 60448

EVANS, DAVID DENIS David Evans, 73, of Mokena, IL entered Valhalla the morning of October 23, 2021. He was born on August 10, 1948 in New Orleans, Louisiana, the son of David and Ethel (Engblom) Evans, both deceased, and loving nephew of Kenny... View Obituary & Service Information

The family of Mr. David D. Evans created this Life Tributes page to make it easy to share your memories.

Send flowers to the Evans family.