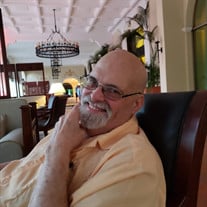 Allan Charles Hostert July 12, 1949-April 12, 2022 72, of Shorewood, passed away unexpectedly on April 12, 2022. Born July 12, 1949 in Joliet, Illinois, Allan Hostert was the son of Charles and Eleanore (nee Meehan) Hostert. A resident of Mokena for most of his life, he most recently resided in Shorewood with his wife Elizabeth (BethAnne) Hostert. He attended Lincoln-Way Central High School, Joliet Junior College, and Governor’s State University. In 1970, Allan was drafted into the United States Army and served our country in Vietnam. After honorable discharge, Al worked for Caterpillar, Formax and then started his own machine shop, Dale Service Group, which he ran for twenty-five years. Al had most recently retired as a professor of Industrial Controls at Joliet Junior College. He very much valued the importance of education and instilled this in his students and every young person he met. Allan, also known as blues harmonica player, “Joliet Al”, and Joliet Junior College Professor, “Professor Al”, enriched the lives of many people through his wide variety of knowledge and skills. He was a seeker of knowledge and devoted many hours to reading books and manuals, and watching how-to tutorials as well as tinkering on projects and building gadgets in his garage. He loved sharing what he knew and could provide a lesson or hands-on training at a moment's notice. Throughout his life, his passion for blues music grew, as he learned to play the harmonica from some of the best. He became a skilled blues performer, known for covering Big Walter Horton’s song, “Have a Good Time”. He met great friends that naturally became blues brothers during his journey of becoming an outstanding harmonica player. As a child, you could find Al building bicycles, motorcycles, and cars with his dad, siblings and neighbors or toying around at his grandfather’s Auto Garage & Ford Dealership on Front Street in Mokena. Al was extremely proud of Cooper and Hostert’s Garage and Dealership and his family's role in the history and development of Mokena and the surrounding area. As a teen you would catch him riding his custom built bicycles and motorcycles around town, driving his customized cars or taking flight lessons at New Lenox’s Howell Airport. He always had his eyes set on an adventure or project. In fact, as an adult, he built his own electric Chevy S-10 pick up truck. He took his love for cars to the race track where he would spend time with friends and family attending car races, such as midget car races and the Indianapolis 500. Outside of mechanics, he loved vacationing, deep sea fishing, and the Chicago Bears. He brought his adoration for education, mechanics, and aviation to both of his daughters and his love for hands-on projects to his three grandchildren, Robbie, Brooklyn and Levi, who he adored and of whom he was very proud. Survivors include his wife Elizabeth Hostert; children Ashleigh (Justin) Velasquez and Heather (Craig) Whitney; former wife and mother of Ashleigh and Heather, Kristen Hostert; brother David (Cindy) Hostert; step-children Philip (Amanda) Munder, Dan Munder and Zachary Munder; his grandchildren Robbie & Brooklyn Whitney and Levi Velasquez, and his faithful and loving dog, Roxie. Allan was preceded in death by his parents Charles and Eleanore Hostert, step-mother Sally Hostert, and sister Barbara Hostert. The family will receive friends for visitation on Monday, April 18, 2022 at Vandenberg Funeral Home, 19604 Wolf Rd, Mokena, from 3:00pm to 8:00pm. Funeral service will take place at Vandenberg on Tuesday, April 19, 2022 at 10:30am, followed by Interment with full Military Honors at Abraham Lincoln National Cemetery.

The family of Mr. Allan C. Hostert created this Life Tributes page to make it easy to share your memories.

Send flowers to the Hostert family.